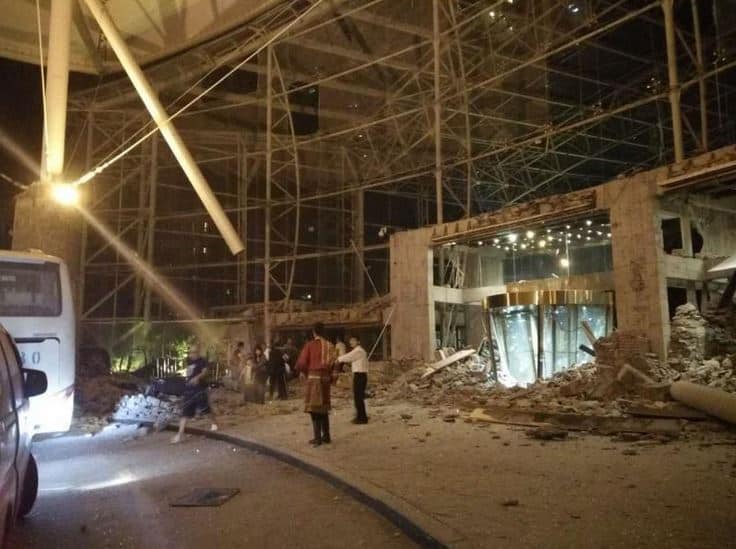 The small town of Zhangzha, at the epicentre of the quake, is believed to have been particularly affected. The quake’s tremors, which could be felt in Chengdu, were also reportedly felt as far away as Lanzhou and Xi’an. Latest reports from provincial government and official media sources put the death count at 20 and injured at 247. 6 tourists are reputedly among the dead. A series of (mostly undetectable) aftershocks have continued to hit the area, (numbering over 700), the most severe of which measuring 4.3 on the Richter scale. Many residents spent the night outside, memories of China’s deadliest earthquake this century, Sichuan’s 2008 8.0-magnitude earthquake likely still fresh in the mind. That quake left 87,000 people dead or missing.

Damage from the quake

Jiuzhaigou county, formely Nanping county, was rechristened in 1998 to reflect the fact it’s home to Jiuzhaigou valley, a Chinese national park renown for its natural beauty. Filled with waterfalls, clear lakes, and cyan water terraces the park draws thousands of tourists a year to the area. In 1992 the park was granted UNESCO world heritage status.

Reports of collapsed houses, loss of electricity and telephone access, landslides and roads strewn with boulders have been circulating on Chinese social media, as have videos of panicked tourists fleeing buildings into the street. August is the height of China’s school holiday tourist season and as such Jiuzhaigou national park would have been particularly busy.

Relief efforts have been rapid

The Chinese authorities’ response has been swift. Of Jiuzhaigou’s 38,799 visitors on Tuesday 31,500 have already been evacuated, while further efforts to move the remaining tourists to safety are expected to be completed by 6pm on Wednesday. According to Xinhua News Agency Chinese President Xi Jinping has called for “all-out efforts to rapidly organise relief work and rescue the injured people”. Medical teams and rescuers have been dispatched to affected areas. Relief aid had been dropped by aircraft and soldiers and policeofficers are reported to have walked through the night to make their way to some of the area’s more remote villages. Most major roads had already reopened by Wednesday morning as the military and emergency services worked overnight to clear the roads of stones and debris.

The region of Sichuan in which Tuesday’s Jiuzhaigou earthquake occured is naturally seismically active. The Longmenshan Fault runs along the Eastern boundary of the Qinghai-Tibet Plateau where the high Tibetan Plateau and Sichuan Basin lowlands meet. Earthquakes in Sichuan are caused by the Indian and Eurasian tectonic plates colliding to the south. As the Indian plate drives northward into Asia it displaces the Tibetan Plateau which in turn is forced eastwards into China. Each earthquake results from sudden releases of tension as the plateau is thrust over the top of the Sichuan basin. The basin’s geological composition further intensifies earthquakes as it’s layers of deep sediment slow seismic waves down. This has the effect of an area shaking for longer.

The Tibetan Plateau is being forced over the Sichuan Basin

In related news, around 7.30am on Wednesday a seperate quake, with a magnitude of 6.6 on the Richter scale, shook remote parts of Xinjiang, 2000km away from Jiuzhaigou. No fatalities have been reported in Xinjiang.

Leave a reply Click here to cancel the reply

This site uses Akismet to reduce spam. Learn how your comment data is processed.

We're not around right now. But you can send us an email and we'll get back to you, asap.